Hilite International has developed into an automotive global supplier after their beginning in 1999.  Hilite’s main focus is on the development and production of systems and components to improve fuel consumption and reduce emissions. Hilite offers its extensive know-how and experience on progressive engine and transmission applications as a reliable and competent partner of OEMs and other customers in the automotive industry.

Vanecam® camphasers are based on the principle of hydraulic rotary actuators. The housing and its sprocket or pulley is integrated in an engine timing drive, and the rotor assembly located in the housing is attached to the camshaft. By actuating the rotor with engine oil, the camshaft can be moved relative to the crankshaft. This movement is fully variable depending on engine load and speed. 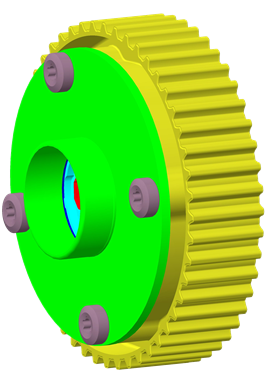 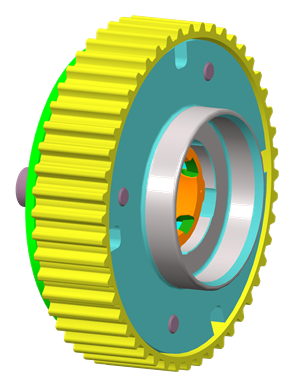 Vanecam® camphasers support all types of timing drives: Roller and bushing chain drives, silent chain drives, tooth belt drives and gear drives. Camphasers can be manufactured out of aluminum to reduce mass and inertia. A special aluminum material can be fabricated by a unique manufacturing process that assures the load capability and wear resistance of aluminum sprockets. Using these fabrication techniques, the mass can be reduced by about 50% when compared to steel camphasers.

Depending on their function within the camphaser, tolerances have various important influences. Looking closely at a camphaser it seems like the inner parts are loose inside the housing, however the tolerances have a functional influence on the assembly process. The components are put together with different fixing devices to change or cause tolerance variation, which in turn has an impact on the function of the part.

The camphaser, while running, rotates 360° and is effected by several different forces during the assembly process. This means that one part or component is affected by different assembly and functional effects in different situations.

The tolerance study for the camphaser simulated the influence of tolerances depending on the sealing situation of the camshaft related to the camphaser, the range between stator and rotor as well as different statements resulting from various measurement techniques within the measuring department or variations that can be projected in a simulated engine environment.  CETOL 6σ provided a clear 3D preview of the camphaser to predict the largest contributors of variation that influence the function of the final assembly.

In a single tolerance study, we applied different assembly states at the same time.  As a result, we could apply larger tolerances in some of the parts as well as identify some drawing specification which also affect the quality and that would be easier to control via measurements. In a single day, we managed to identify the key contributors of variation in a given assembly. This was never possible with by a simple stack based tolerance calculation.