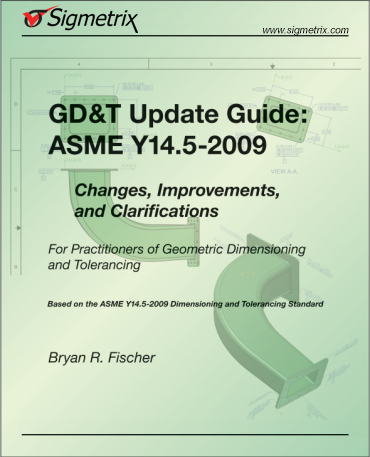 Now in its second printing. The GD&T Update Guide: ASME Y14.5-2009 is the first entry in our new series of GD&T reference materials, and it discusses the principal changes and improvements in the ASME Y14.5-2009 standard. Changes in the structure, philosophy, expansion of scope, and the overall intent of the new revision are discussed. New terms, definitions, symbols, rules, feature types, tools, techniques, approaches, and changes made to each section of the standard are also discussed. The GD&T Update Guide: ASME Y14.5-2009 also includes a detailed paragraph-by-paragraph explanation of the principal changes in ASME Y14.5-2009.

Author's Note: This is a great book, beautifully laid out, with 222 2D and 3D full-color illustrations. Many of the concepts explained are accompanied by figure sequences which are constructed to explain each step of a process. This book sports a new cover design, high-quality paper and binding, and will become a trusted resource for understanding GD&T. The book contains multiple approaches and examples of Datum Feature Simulation sequences and gaging examples.

This text is the best all-encompassing explanation of the ASME Y14.5-2009 standard. One would have to read and understand seven of the currently released books by other authors on ASME Y14.5-2009 to gather the same amount of information, and not every author addresses all of the material covered by the GD&T Update Guide."

Note from Bryan: Thank you for the great review!

Our Books, Training Material, and approach are suited to a varied audience, including engineering, design, inspection, manufacturing, assembly, quality, service, procurement personnel to name a few.

All of our Courses and Training Materials are coordinated. Our Books and Materials are leading-edge and represent the latest thinking on these topics. We are members of several national standards committees, regularly attending meetings to help improve and contribute to the next generation of the standards.