Using Just +/- Tolerancing Can Lead to Problems in Manufacturing

People often believe that Geometric Dimensioning and Tolerancing, or GD&T, offers no benefit for simple parts. However, in this short video we’ll explore how using just +/- tolerancing can lead to problems in manufacturing.

Let’s examine what can happen on this simple part. Specifically we’ll look at the height as controlled by the 10 +/- .1 mm dimension depicted here. 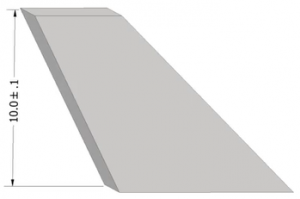 After the parts are made an inspector measures the overall height of one at 10.1 mm, though there’s a small gap of 0.2mm on one edge. Since the minimum and maximum thickness falls within the +/- 0.1 mm tolerance zone, this seems to be a good part.

Another inspector decides to measure the same part as shown here. This time, though, the overall height is 10.49 mm and the part is rejected as not meeting the requirement. 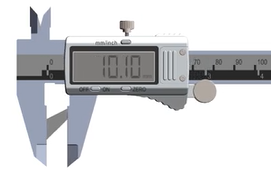 Why did the two inspectors come to completely opposing conclusions on whether the part complies with the drawing. Who is correct?

The problem is caused by both inspectors using a different reference for the measurement and hence measuring in slightly different directions. Though only 2.3 degrees apart, this slight difference leads to completely opposing conclusions about what to do with the part.

Can you understand how people might waste time debating whether or not this part is acceptable? Not only may working parts be rejected, but this same ambiguity may also result in parts that meet the drawing but not function in the assembly. Both scenarios reduce the company’s profitability.

GD&T offers a powerful solution to avoid this problem. First it provides a method for identifying which surface, or surfaces, should be used as the reference for measurements. These references, called Datum Features, are identified with a specific symbol and letter. These features typically correspond to how the part functions in the assembly.

Here we’ll assume that the bottom face of the block mounts against another part in the assembly, so we’ll use the bottom as the reference. 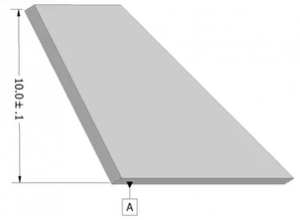 However, simply adding this symbol has actually not changed anything with regard to the existing callout. Though its presence would imply that the bottom surface is to be used as the reference for the measurement, there’s nothing requiring it to be, so both inspections previously performed are still valid.

To require the Datum Feature be used as the reference for inspection, it must appear in a Feature Control Frame, or FCF. The FCF consists of three sections:

1. The type tolerance being applied, in this case Profile of a Surface
2. The size and shape of the tolerance zone.
3. The Datum Reference Frame, or DRF. This particular callout says that Datum A, as defined from Datum Feature A, should be used to establish the location and orientation of the tolerance zone described in the first two sections. 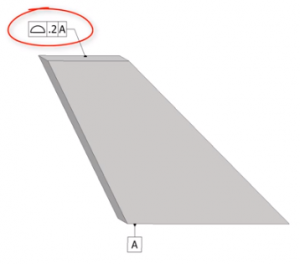 Since the tolerance is established in the FCF, we remove the +/- tolerance from the dimension identifying the ideal location of the surface and put a box around the dimension, designating it as a “basic” dimension used to locate and orient the boundaries with respect to the Datum Reference Frame.

Now everyone measuring the part against the drawing must do so in the same way – using Datum Feature A to establish both the origin and direction of the measurement. GD&T thus removes the ambiguity and helps achieve measurement consistency while also helping the reader of the print to have a better understanding of how the part is used in the assembly, assuming it has been correctly applied.

Learn more about how our GD&T Training option so you can clarify your design requirements: https://www.sigmetrix.com/services/gdt-training-courses/