ZF ELECTRONICS LOCKS THE DOOR ON THE COMPETITION WITH CETOL 6σ 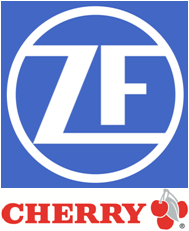 Headquartered in Pleasant Prairie, Wisconsin, ZF Electronics Corporation—formerly Cherry Corporation—is a leading manufacturer of high-performance switches, sensors, controls and computer input devices targeting specific   industries that require rugged, long-life    components and     devices.   ZF Electronics supplies product to nearly all of the major manufacturers of on-highway and off-high vehicles and all of the major appliance manufacturers.  ZF Electronics is owned by ZF Friedrichshafen AG, a $15B supplier to the global vehicle market, headquartered in Germany.

The engineers at ZF Electronics were finding it more and more difficult to predict how their assemblies would perform in the field due to the growing complexities.  In addition, they would go through multiple iterations to get the tolerances on tooling adjusted in order to achieve their desire fit on assembled devices. 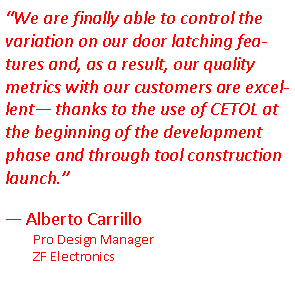 As a result, they began their search for a solution based on 3 primary requirements:    1) would work with their existing 3D mechanical CAD system from PTC, 2) was fast, with very accurate results, and 3) would handle their GD&T requirements.  After an extensive evaluation, they purchased CETOL 6 Sigma from Sigmetrix.

They felt CETOL’s derivative based analysis method was faster and more accurate than the standard Monte Carlo methods used by competitors and its tight integration to Pro/ENGINEER and capacity to handle GD&T was better than other comparable  software on the market.

They have been using CETOL for just over a year and have realized significant cost and time-to-market benefits.  Inserting CETOL into their design process helped ZF Electronics to:

Before implementing CETOL, the engineers at ZF Electronics, invested up to 60 hours per design doing simple tolerance stack-up analyses using spreadsheets for assemblies of no more than 5 parts.  Even though there were relatively few parts, because of the complexity, it required an extensive amount of work that had to be done by hand.  The results showed only worst-case scenarios and the information was limited to just a few parameters.

Even with their manual methods of doing stack-up analysis, they still required up to 3 prototype iterations to tune their tooling   design.  Each iteration costs up to $8000, in addition to up to 6 weeks production time involved. 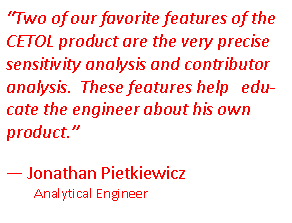 Shortly after CETOL was brought in-house,  ZF Electronics put the software to the test in a potential problem on their door latch assembly.  The mechanism could potentially send a signal to the instrument panel that the latch on the door was locked when it was not.   To ZF Electronics this was a potential safety risk.

Using their spreadsheet methods, to alleviate any safety issues the engineers were very conservative in applying their tolerances.   Since they had to plan for worst case conditions, they were then forced to use suppliers that could hold tolerances more tightly—which came 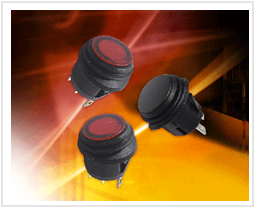 Using CETOL, they were able to identify the areas that were very sensitive to small variations and which ones contributed the most to the variation in order to determine the real probability of these failure conditions occurring.   CETOL was able to predict how much each measurement was impacted by manufacturing variation prior to going to production.

CETOL allowed them to create various scenarios in order to finalize on the best solution.  After  running the what-if analyses, CETOL was able to predict the level of quality that could be expected once the change was implemented.

CETOL has made life easier for the engineers at ZF Electronics.     In the door latch mechanism, after using CETOL the final product had over 50% less variation than was possible using the spreadsheet methods.

Now they do minimal hand calculations and can complete the analysis of complex assemblies in a couple of days instead of weeks as was the case when they were doing manual calculations using  spreadsheets.  Its capabilities to run what-if scenarios and capture statistical data make it very simple to explore different alternatives to solve stack-up issues.

The results have been significant:

Since the first test, ZF Electronics has been able to reduce the number of prototypes on most designs from 5 iterations to one.  In addition to the savings in the cost of the prototypes, the major savings has been in the engineering, purchasing, and production time.

The results have been so significant that ZF Electronics expects even more of their engineers to use CETOL as part of their design process – throughout the concept validation phase, during design validation and to solve quality and manufacturing issues on designs currently in production.

Would you like to see CETOL 6σ in action?