Getting it Right, before it’s Built: Using CETOL 6σ for an Integrated, Low-Risk Approach to 3D Stack-Up Analysis

Engineering managers at the Hilliard Corporation identified an increasing risk in their tolerancing practices. Their traditional techniques included large amounts of manual labor, lacked the required fidelity for complex designs, and offered little recourse for troubleshooting finished products. Hilliard required a tool that could keep pace with their product innovations.

After assessing different solutions, Hilliard chose to use CETOL 6σ for their new, and improved, approach to tolerance analysis. By integrating into Hilliard’s CAD system, CETOL 6σ provides a means to quickly perform 3D stack-up analysis earlier in their design cycle and gives them new abilities to make evidence-based design decisions, all while saving time compared to their traditional methods.

By adopting CETOL 6σ, Hilliard has saved significant time and money in multiple areas of their design process. They’ve removed bottlenecks from their design process, reduced tolerance issues during manufacturing, and improved their ability to troubleshoot production issues. With a return on investment (ROI) that surpassed all estimates, Hilliard plans to increase their adoption of CETOL 6σ across other engineer departments in the future.

In recent decades, modern design tools have helped engineers become significantly more proficient in their work. The advent of CAD tools helped systematize entire companies’ design portfolios, reducing many of the risks and limitations of a paper-only approach. However, while CAD tools are now ubiquitous, many of these same companies continue to perform their tolerance analysis using manual calculations in spreadsheets, or even a basic, paper-based approach. The risks of traditional approaches to tolerancing can impact the continued success of a company, especially when new products can impose tight tolerance requirements.

To curb the risks inherent in spreadsheet and paper-based approaches, companies are adopting new tools that work seamlessly with their CAD systems. Engineers at Hilliard worked with Sigmetrix in adoption of their tolerance analysis software, CETOL 6σ, to shorten development cycles and reduce tolerance-related issues occurring during production. Hilliard has been developing motion control and filtration products for over 100 years. As they’ve continued to develop new products, their design processes have kept pace with modern engineering standards.

Witnessing challenges with their current tolerancing methods, Hilliard needed a new solution that would give them fast, accurate simulations of the expected variations at earlier stages in the design process.  John Updyke, Drive Train Engineering Manager at Hilliard, explained that they needed a technique that “didn’t need manual calculations, or repeated checks of these calculations, to speed up the tail end of our design, which is often a bottleneck.” Like many engineering managers, John was hesitant to adopt a new technique for his team, but a recent product issue made it clear using software like CETOL 6σ was necessary to ensure more robust products.

John’s team was recently having issues with their line of front wheel differentials. A customer had issues that initiated a root-cause investigation. John’s team didn’t have CETOL 6σ at that time, so their typical investigation included labor-intensive tests, and manual verification of a wide range of design aspects to solve the problem. However, upon adopting CETOL 6σ, John’s team quickly explored this same issue to verify CETOL 6σ’s ability to troubleshoot problems.

For Hilliard, the field issue was due to some complex angular tolerances that weren’t captured by their traditional approach. By investigating this problem using CETOL 6σ, they quickly found the issue that had previously taken huge amounts of resources to fix. John’s team used this issue to verify the speed and accuracy of troubleshooting with CETOL 6σ. For this issue, “we could have gone back, run the analysis, see the possibility of failure, and changed the required tolerances,” John mentioned, noting that this whole process would be possible without having to wait and discover issues in the field.

The results gave John confidence in using CETOL 6σ in their future designs. “If we had designed that product using CETOL 6σ, this problem wouldn’t have existed in the first place.”

How could a single tool help identify a design issue that was causing this much concern for a team of skilled engineers?  Engineering teams typically only have spreadsheets at their disposal, resulting in analyses that end up being too simplified for the complexities they are dealing with.  Using spreadsheets or paper-based methods for tolerance analysis not only requires a higher investment of manual labor, but it lends itself to simpler methods of tolerancing. While often sufficient for straightforward designs, linear stack-up analysis is only concerned with how different tolerances are impacted in a single direction. This can often lead to engineers missing more complex interactions between components across the full three-dimensional space. By using 3D stack-up analysis for tolerancing, the full interactions across a component are taken into account, giving engineers a clear idea of the tolerances to expect on the manufacturing floor. 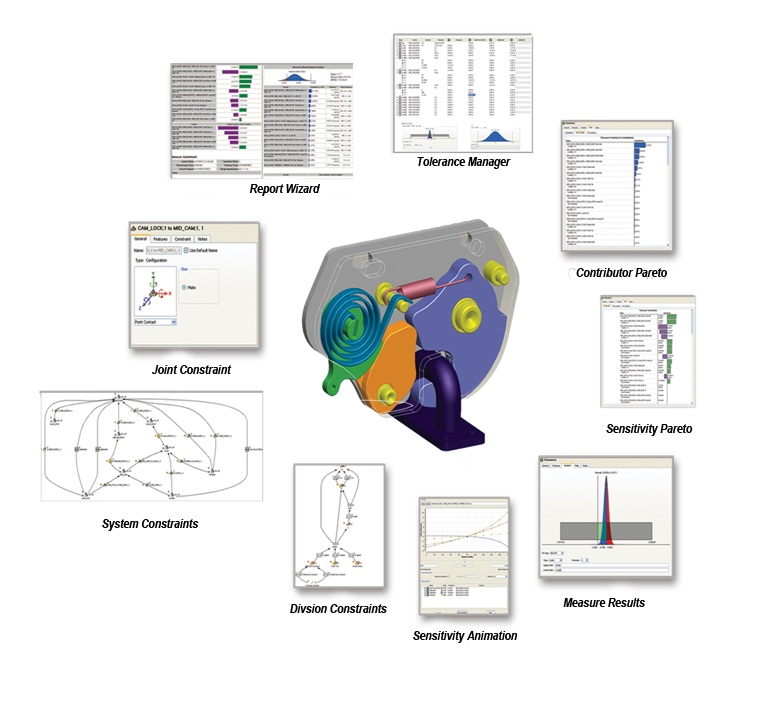 While Hilliard’s ability to determine the cause of field issues has been greatly improved, the benefits of using CETOL 6σ 3D stack-up analysis go far beyond troubleshooting. Many companies, including Hilliard, have often performed tolerance analysis using “worst case scenario” analysis, which provides only part of the picture when it comes to understanding tolerance and manufacturing. CETOL 6σ has allowed Hilliard to quickly perform statistical analysis on their designs, providing them with a clearer picture on the percentage of parts likely to fail, even when no particular component is significantly out of tolerance.  This has helped Hilliard prevent tolerance issues that can be difficult to spot using only a worst case analysis.

Using CETOL 6σ has also allowed Hilliard to begin their tolerance analysis earlier, removing a common bottleneck in the later phases of the design process when these analyses had historically been performed. Starting this work earlier is giving them more time to improve designs and is also balancing the workload of their entire process, which helps prevent uneven timing of work delivered to manufacturing.  Using CETOL 6σ has also ensured that tolerance specifications are delivered with a higher degree of accuracy than ever before, removing the ambiguity that is sometimes left with the manufacturing team to sort out.

As the use of CETOL 6σ continues at Hilliard, their overall design process is becoming more consistent with respect to tolerancing. In the past, tolerance analysis involved redundant, spreadsheet-based work, especially when certain parts were reused across designs. Using CETOL 6σ, John’s team can reuse parts from their CAD library and the resulting tolerance information will automatically be incorporated into new designs. By integrating into their CAD software, CETOL 6σ is helping Hilliard prevent mistakes arising from complicated part interactions that spreadsheet-based tools were unable to capture. With these improvements in place, Hilliard is ensuring that their design knowledge is preserved for better use in the future, lowering the risks associated with engineer turnover.

Adopting new design tools poses a challenge for any company. Sigmetrix helped Hilliard with their software deployment by providing training that allowed Hilliard’s engineers to work on their own designs during the class.  Other companies will face cultural barriers, as the use of traditional techniques will be viewed as sufficient, even if these techniques are causing internal manufacturing problems not visible to engineering and management. In Hilliard’s case, these barriers were overcome by focusing on the possible improvements to their designs, and subsequently the ability to create better products that give their customers a greater degree of assurance. For John’s team, the results were clear: “CETOL 6σ gives us a better, more robust product.”

Sign up for your own demo of CETOL 6σ